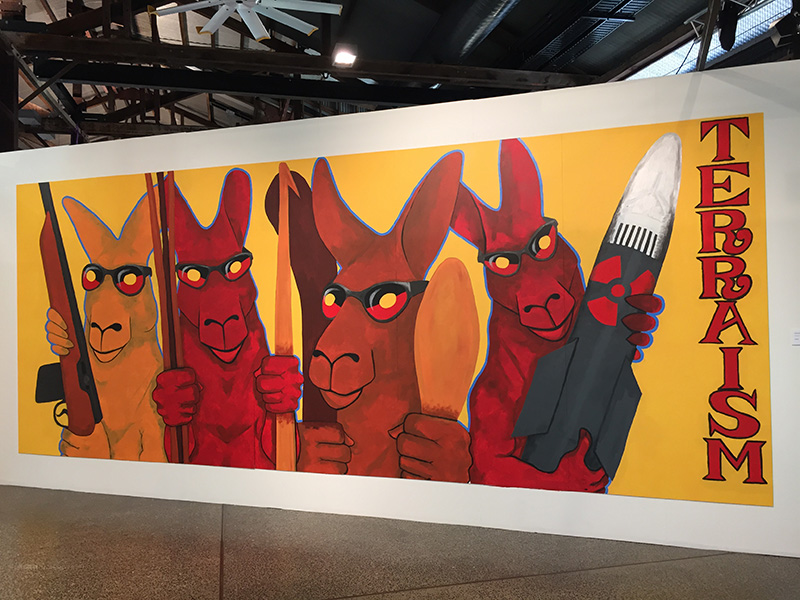 Dark+Disturbing’s is always described as “a curatorial project by Vernon Ah Kee”. Until now, the only activity our audience has seen is the tshirts we have sold at a few Aboriginal art events and online. However, on Thursday last week, our second official D+D activity was launched – Gordon Hookey for proppaNOW at Cairns Indigenous Art Fair 2015.

I conceived and curated the proppaNOW participation at Cairns Indigenous Art Fair to highlight the talent and power of Gordon Hookey, one of this country’s most prolific artists and one of the founding members of proppaNOW. In this exhibition, those already familiar with Gordon Hookey’s work will know the kangaroos represent Aboriginal sovereignty. In this new work created straight onto the wall in Cairns, there is no ambiguity and nothing surperfluous. His are Aboriginal warriors – steadfast and unflinching. They hold various cultural objects, the gun, the spear, the woomera, the missile – all objects and tools of war. The blue aura that surrounds them highlights their role in the ongoing holy war between invader and invaded. This exhibition is a fitting tribute to Gordon’s almost three decade-long career.

Dark+Disturbing is my personal curatorial vision. It interrogates power structures. It explores Aboriginal sensibilities around knowledges, identity and protest. and is a platform for Aboriginal voice. Gordon Hookey’s Terraism exhibition is a fitting first exhibition Dark+Disturbing.

As curator, I’d like to acknowledge and thank proppaNOW for their generosity, Gordon Hookey for his incredible talent and hard work, Milani Gallery for supplying the video work and drawing to be exhibited, and the CIAF team for providing the opportunity to exhibit and their skill and assistance at install.

A special thanks to Leesa, and the whole Iscariot Media team in Brisbane who generously continue to support the Dark+Disturbing project.

I look forward to many future activities.